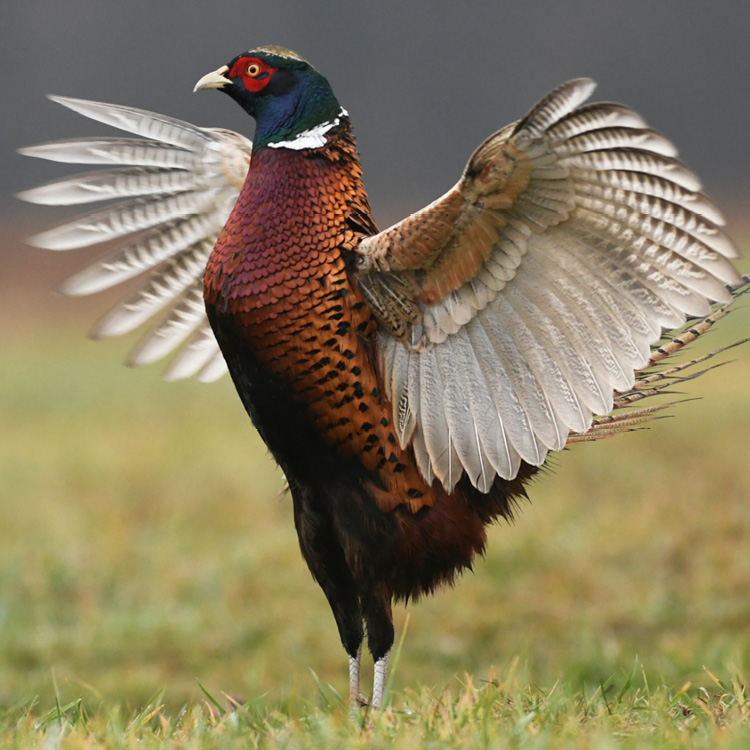 The common pheasant, or Phasianus colchicus is a bird of the Phasianinae subfamily, Phasianidae family, Galliformes order. It was originally an Asian species introduced into other parts of the world. It is a domesticated bird and is a common prey of hunters.

Its body reaches 85 cm long, it weighs 1.7–2.0 kg. Males are larger than females. The head of the common pheasant, unlike other species of pheasants, has only a ring around the eye left unfeathered. The very long wedge-shaped tail consists of 18 feathers narrowing to the tip. The top of the short rounded wings is made by the fourth and fifth remiges. Males have spurs on the legs and a shiny plumage. Males are colored brightly with metallic shine on the plumage. Their color is quite variable. The northern male species have golden-green heads and necks with a black-violet tint underneath. The golden-orange back coverts with black lining gradually turn into copper-red upper tail coverts with a violet tint. Tail coverts are yellow-brown with copper-violet edges. The naked ring around the eyes is red. Females are dull-brown, sand-gray with brown-black spots and stripes.